Choose The Ceremony That's Right For You

Depending on your origin you may choose a ceremony to honor your background:

Breaking of the Glass  - Jewish

Jumping of the Broom - African-American 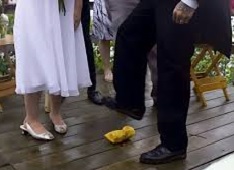 Breaking of the Glass

The Breaking of the Glass is a beautiful Jewish tradition.  It is symbolic of the fall of Jerusalem, but the shattered glass also reminds us of the fragility of a marriage.  It tells us that with a single thoughtless act or loss of respect in your relationship can also be shattered.   A beautiful paragraph is read during this meaningful ceremony.

ARRAS -    This is a Spanish tradition and consists of the groom presenting the bride with 13 coins known as arras (unity coins).  Some say that the 13 coins represent Christ and his 12 Apostles.  The arras is  symbolic of the groom's commitment to support the bride.  However, times have changed and today's brides and grooms exchange the coins as a symbol of the wealth and finances they will equally share.

LAZO -   Representing unity and protection, a large loop of rosary beads or a white satin circle cord is placed interlacing the necks of the couple after they have exchanged their vows and rings.  Special members of the wedding party are in charge of "lassoing" the couple together after they kneel for their wedding prayer or special reading, draping the shoulders of the couple, the groom's shoulder first.   The couple wears the lazo throughout the remainder of the service and then it is given to them as a keepsake.

MANTILLA - The mantilla is a long, white lace veil typical from Spain.  The color white symbolizes the pureness and beauty of marriage.  The mantilla is long enough to keep warm and embrace two people that love each other and promise to always be together.  And finally, it is delicate representing the fragility of a relationship.  After the ring exchange, the mantilla is placed on the head of the bride and the shoulder of the groom, uniting them and  symbolizing their union and love.  While the mantilla is being placed, a special song is played, usually the Ave Maria.  When the song ends, the mantilla is removed by two family members or friends. 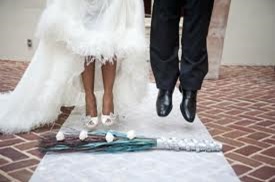 Jumping Of The Broom

The Jumping of the Broom Ceremony is an African American tradition.  It signifies the entrance into a new life and the creation of a new family by symbolically "sweeping away" the former single lives and former problems.  By jumping over the broom to enter upon a new adventure as husband and wife, the newlyweds will jump the broom and embark into a life of respect and love.